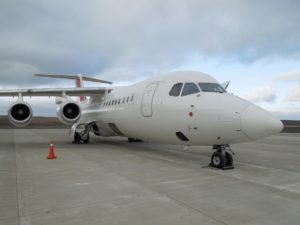 An Avro RJ100 jet aircraft operated by Tronos Jet Maintenance and carrying two Atlantic Star Airlines personnel, successfully conducted a technical stop at St Helena Airport on Friday 21 October 2016 – as part of a delivery flight to a customer in Chile.

Positive cooperation between various teams enabled Tronos to gain the necessary approvals for this particular delivery flight.  On board were 13 persons, including Richard Brown and Aiden Walsh of Atlantic Star Airlines – one of a number of potential partners with an interest in operating regular flights to St Helena.

The Tronos flight will provide the Airport with additional real time data and a pilot’s report – all part of building a more comprehensive picture of the conditions under which we will be asking a scheduled air service to operate.

The arrival and departure of the aircraft attracted much public interest on St Helena, with landside facilities at the Airport made available for public viewing.

Intensive work continues to mitigate the challenges of wind shear at the Airport.  Getting this right and putting in place a scheduled passenger service involves complex work and will take some time.  Whilst the focus of everyone’s work is to resolve these issues at the earliest possible opportunity, safety remains paramount.